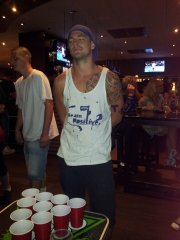 This is the new in sport for a Thursday night out at one of the local bars, Crowded House. It’s Beer Pong and the boy’s, Steven and Nick, told me they are up there with the best in town. So have been checking them out, they won the tournament three weeks back, got third two weeks back and got hammered this week. They have a friend called Kim Bo and she seems to have the upper hand on the boys. But it’s a great night out with the boys. Just for the record, Sam and myself played Steven and Nick back at the flat last Thursday and we won on the last throw. So won’t let the boys forget that one. Was good to have a good partner !!!!!!!! 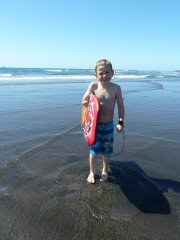 The good weather is holding, haven’t seen any rain now for over a week and should stay like this for another week. So have been enjoying the sun, blue skies and the beach, the temperatures have been hanging round 24 – 26 each day. Doesn’t sound a lot, but the sun is really hot. Max has started up with his new sport, Boggie Boarding and seems to have a good talent for it, wonder where he got that from !!!!!!! Our earthquake count seems to be drying up at the moment, have only moved onto 19. 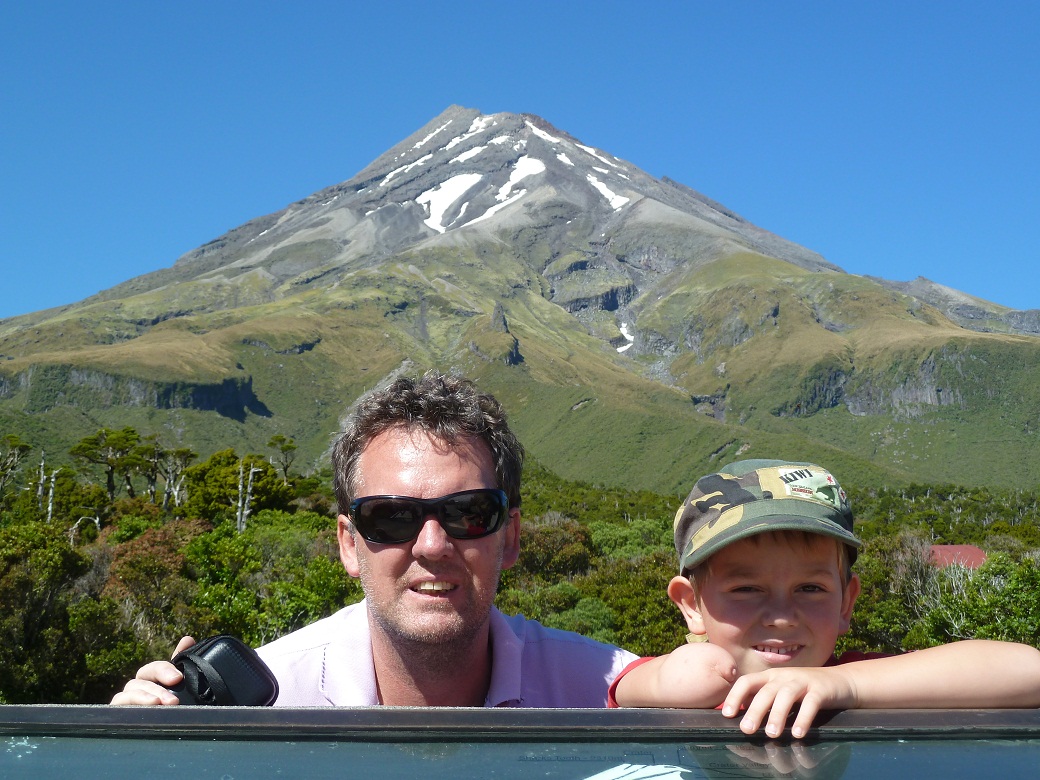 We headed up for a three day tramp on Mt Taranaki, where the weather was great, 24 degrees, not a cloud in the sky. Our first day covering 7.5 km from North Egmont to Holly Hut. The track leads steeply uphill and passing below the Dieffenbach Cliffs. Further on we crossed the Boomerang Slip (a dangerous place, one wrong step and you end up 200 metres down the mountain), its only allowed to cross one person at a time. Its one of three slips that needed to be crossed. Then heading on past the Kokowai Track junction before descending to Holly Hut. Took us 4 hours 30 minutes, with Max being great, like a mountain goat. Met some nice people who were also staying the night (20 in total), Max even got three girls from Auckland to play Star Wars cards. So it was off to bed pretty early, as was feeling the legs a bit. Next morning was nice and early, as most were already on the way before seven. Day two for us was Holly Hut to Pouakai Hut (4.5 km), following the Ahukawakawa Track and down the boardwalk across the Ahukawakawa Swamp. After crossing the headwaters of the Stony River/Hangatahua, the track ascends a ridge through mountain cedar to reach the Pouakai Track. This ridge is a great test if you still have sore legs from the day before. We needed 3 hours for this, a bit chilli to start with, but improved as the day went on. A bit of low cloud hanging around the summit (2518 metres), but still some great views of the Pouakai Range and back towards the summit. And as we made such good time, we arrived at the Pouakai Hut round noon (our first intention was to stay a night here) and decided not to hang around the whole day and made the descent down the Mangorei Track, a 2 hour walk. But not before having a few Star Wars games and lunch. So our three days ended up being two, but had a great time and I was amazed with how Max went (would have been nothing for Alicia). Needed two days after for the legs to recover. 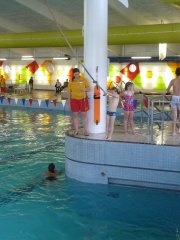 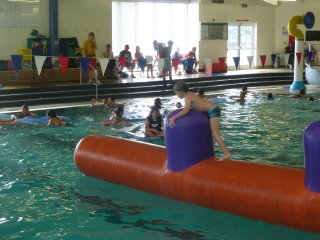 Have had a couple of days with rain, so have changed from the beach to the pool. They have the Aquatic Centre in New Plymouth which has a wave pool, hydroslides, kids pool, swings and jumping areas into the pool. They also have this inflatable toy, more of a climbing course over water which is 25 meters long. So have been down the hydroslide about a 100 times in the last two days (as you can only go down at the age of eight, without parents) and Max has been mastering the inflatable course, he made it to the end twice today. The weather was good enough this morning to get out with the scooter on the Walk Way, so got a few more kilometers in. And just for the earthquake count, we are now upto 18. 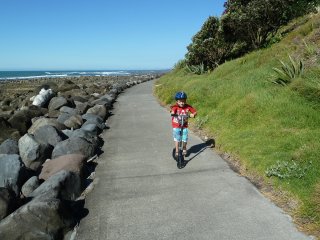 Have invested in a new scooter for Max and what a good investment. Have been out nearly every morning on the Coastal Walkway. The award-winning Coastal Walkway is an 11km path that forms an expansive sea-edge promenade stretching from Port Taranaki all the way to Hickford Park in Bell Block. So we have covered about half of that till now. Started off in town yesterday morning and made or way out to East End Beach, so ended up at the beach again. We headed off to the cricket in the afternoon, the CD Stags (thats the local team here) played against Otago Volts, a 20 – 20 game, won’t explain that, but we lost with 4 ball to go. But they had a big crowd up at the park. Max spent more time racing around the cricket ground than watching the game, but thats OK. 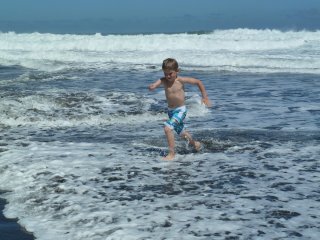 Have been in New Pymouth for eight days and have had 15 earth quakes, the latest being last night, a 4.6, this time being just off the coast of New Plymouth. The Met office perdicts it should rain nearly every day here, but are still having great weather, mostly cloudy in the mornings a bit, but the afternoons sun pure. It’s only 26 degrees but the sun is really strong, feels like 40. So you could imagine what we do, turning into real beach bums. 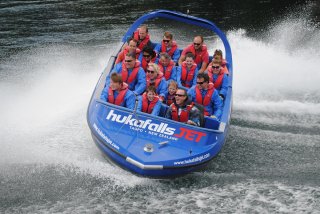 We spent five days in Taupo with Fran, Vern, Tanya, Terry, Max and myself. Had the best weather possible, warmest day being 31 degrees. Going jetboating on the Huka Falls Jet, White Water Rafting, a boat cruise out of the Maori Rock Carvings on Lake Taupo with the Ernest Kemp (and old steam boat), a float plane flight over the west side of Lake Taupo and over Huka Falls. And our last trip being a river cruise on the Waikato River to Huka Falls. A bit of a high light for Fran was beating out Terry in OH Hell for last place. Just for the record: Vern and Craig (174 points), Tanya (169), Fran (122) and Terry (121). So had a great time. 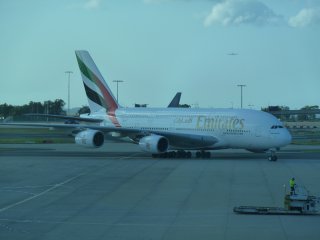 After flying from Sydney to Auckland with the A380, a huge machine, it was a very close call for our inland flight. The flight from Sydney being two hours to late, which left us only one hour and 10 minutes to get through passport control, collect our bags and head to the other terminal. Checked in at 16:10 and the plane left 15 minutes latter. Our first night in New Plymouth was very interesting, had two earth quakes during the night, the first being at 3:00 and reading 5.4 on the scale, the second coming 20 minutes latter and having a reading of 5.1. The quakes centering just off the coast of Opunake, just down the coast from New Plymouth.